“I’ve come to think of her as a sort of Mother Earth figure. You know, Lilith, Eve, the first woman –.”
“I don’t know,” Richard says….”Looks more to me like the last woman.”

The Last Woman by John Bemrose is an elegy for the ending of love; for a forest, clear-cut landscape; for simple equity for the lives of people – in this case Ojibway – who are caught in the ugly transition from “what was” to “what is.” On one level, The Last Woman is the story of a love triangle, simple and straightforward. On another, it is the story of a clash of cultures, each trying to do things for the right reasons and each totally misinterpreting motives. It is about politics where truth and justice don’t matter. It is about a land claim, secrets, ambitions and dreams, art and logic, and the totally different way that indigenous people think about and live on the land. In short, Bemrose has written a complex story, weaving the personal angst of his characters into a web that includes greed along with cultural and environmental destruction. Bemrose’s writing is measured; he doesn’t rant, although readers will see where his sympathies lie.

Over the years, I’ve bought books by the few Indians (First Nations in Canada) who managed to get published. I think that Halfbreed by Maria Campbell was among the first, along with books by N. Scott Momaday. Later, books by Louise Erdrich made their way to my shelf and some by Thomas King, plus harder to read books like for Joshua by Richard Wagamese, poets like Lee Maracle and gritty Métis poet Katherena Vermette. I own Anne Cameron’s Daughters of Copperfield, a book that generated controversy in the early 1980s (that continues to rage) about who has the right to the traditional stories, to their telling. Of course, I have the well-packaged and easy-to-embrace collections of quotes from the speeches of elders, such as Touch the Earth. And yes, academic and anthropological work sits there too.

More recently, publishing has opened to First Nations people in a way that seemed previously closed, and there’s new controversy on the topic of who speaks for whom. The editor of Write: The Magazine of the Writers’ Union of Canada resigned over his editorial in the Spring 2017 issue. He writes: “I don’t believe in cultural appropriation. In my opinion, anyone, anywhere, should be encouraged to imagine other peoples, other cultures, other identities.” I suspect that farther down in the editorial his admonition to “Set your sights on the big goal: Win the Appropriation Prize” is what skewered him. I read it as inappropriate, as did many others – not political correctness, but a “middle-finger salute.”  Indigenous people in Canada (likely everywhere) are capable of speaking for themselves. They don’t need interpreters. But there is a blurry line, although both history and today’s reality badly need the First Nations’ perspective. So, back to The First Woman….

Bemrose walks a fine and informed line as he writes about the land claim and as he develops the character of Billy, of Billy’s loss over his cultural heritage, his land, and the trees gone to clear-cutting. He writes with sensitivity about the childhood attraction and, later, physical love that Billy and Anne shared, as he does with the friendship that once existed between Billy and Anne’s husband Richard.

I wonder what critics today would think about Martin, my character in Calla & Édourd. Martin is a fiction, who grew out of my experience living in Winnipeg. My empathy grew out of my grandmother’s reluctance to talk and her mother’s stories. Yet, now I wonder if readers would feel a line has been crossed. But, once more, back to the novel….

The excerpt that leads into this review fixes our thoughts on a painting and on environmental destruction and provides the title for Bemrose’s novel. But the story is about more than that, it digs and niggles down into a core fault-line. I would love to learn what readers – who have read the novel (and maybe mine) – think. 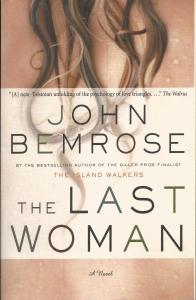 Available through your local bookstore or online: The Last Woman