Readers will be drawn quickly into this story of a man caught up in the tangle of personal and societal challenges and his struggle to survive on his terms. Writers will want to read with an eye as to how J.M. Coetzee writes an emotionally moving story without a trace of sentimentality. There is nothing superfluous in Coetzee’s narrative; it is the stark story of one man’s journey (although perhaps an allegory too).

J.M. Coetzee creates an entire life, beginning with Michael’s birth, keeping a quick pace, yet giving readers all the information they need to develop their own ideas about Michael K and his life. We first meet the infant, born with a hair lip, whose mother “shivered to think what had been growing in her all these months.” Then, “Because of his disfigurement and because his mind was not quick, Michael was taken out of school after a short trial” and sent to a state institution until he was fifteen. “Because of his face K did not have women friends. He was easiest when he was by himself.” We learn all of this, starkly, and without elaboration, in three pages. When the narrative opens, Michael is working as a gardener. His dying mother wants to go home to a childhood farm on the veld. Michael, dutiful son, attempts to obtain travel documents, which never arrive. He quits his gardening job at Wynberg Park, City of Cape Town, and they leave without the required papers. On foot, pushing his mother in a make-shift cart, the journey begins.

In Life & Times of Michael K, J.M. Coetzee has taken one damaged man and written a lucid, spare story of his determination to live his life his way. True to the best character driven stories, Michael changes. Mid-way through the story, Michael realizes it.

When he thought of Wynberg he thought of an earth more vegetal than mineral, composed of last year’s rotted leaves and the year before’s and so on back till the beginning of time, an earth so soft that one could dig and never come to the end of the softness; one could dig to the centre of the earth from Wynberg Park, and all the way to the centre it would be cool and dark and damp and soft. I have lost my love for that kind of earth, he thought, I no longer care to feel that kind of earth between my fingers. It is no longer the green and the brown that I want but the yellow and the red; not the wet but the dry; not the dark but the light; not the soft but the hard. I am becoming a different kind of man….

Nevertheless, Michael’s limitations impede him: “Always, when he tried to explain himself to himself, there remained a gap, a hole, a darkness which his understanding baulked, into which it was useless to pour words…. His was always a story with a hole in it: a wrong story; always wrong.” Like the best protagonists, Michael is aware and flawed too. But eventually, he does understand something essential in his own immutable way:

When my mother was dying in hospital, he thought, when she knew her end was coming, it was not me she looked to but someone who stood behind me: her mother or the ghost of her mother. To me she was a woman but to herself she was still a child calling to her mother to hold her hand and help her. And her own mother, in the secret life we do not see, was a child too. I come from a line of children without end.

Michael K is a most memorable character. J.M. Coetzee has won two Booker Prizes (1983 and 1999) and the Nobel Prize in Literature (2003), among other honours and awards. If you “Read Like a Writer,” you can read no-one better than Coetzee, and if you creating a character-driven story, take note of Michael’s path. 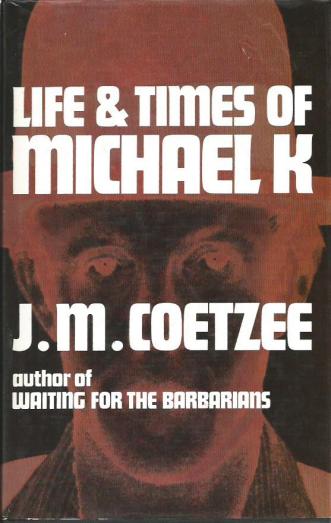 Available through your local bookstore or online: Life & Times of Michael K

If you like this story, you may also enjoy reading my review of Nadine Gordimer’s None to Accompany Me