Readers don’t have to be sailors to enjoy this travelogue through the Inside Passage where we sail and cross unanticipated borders. For those “reading as writers” I make two suggestions: First, consider how Raban weaves two distinctly different themes in one story; second: those who are writing historical stories can learn much by noting how Raban draws upon others’ experiences and interpretations and how he weaves these with his own to create a nuanced narrative.

Ostensibly, Passage to Juneau is a sailing memoir that Jonathan Raban makes from Seattle, through Canadian waters, to Juneau Alaska. Readers are taken along on a journey that follows the route of George Vancouver who captained the surveying expedition of 1791-95 for Britain and for whom Vancouver Island and the city on the mainland are named. The Passage challenges. Raban notes that “The Inside Passage to Alaska, with its outer fringes and entailments, is an extraordinarily complicated sea-route, in more ways than one.” It’s a passage he makes alone, leaving his wife and young daughter alone in Seattle. For company, he fills bookshelves on his 35-foot sailboat with history, lore and myth written by anthropologists and sailor-writers. As he prepares to leave land, he candidly writes:

I am afraid of the sea.…I’m not a natural sailor, but a timid, weedy, cerebral type, never more out of my element than when I’m at sea.

Yet for the last fifteen years, every spare day that I could tease from the calendar has been spent afloat, in a state of undiminished fascination with the sea, its movements and meanings. When other people count sheep, or reach for the Halcion bottle, I make imaginary voyages—where the sea is always lightly brushed by a wind of no more than fifteen knots, the visibility always good, and the boat never more than an hour from the nearest safe anchorage.

He sets off, hugging the coast.

This is my second Jonathan Raban travel story. A few years ago I read Arabia Through the Looking Glass and looked forward to Passage to Juneau, anticipating more of the same. Rabin takes a novelists’ approach, creating skilfully drawn characters and keen insight into people and places. He merges historical interpretations and impressions with his own insights and style, but here he’s a little more acerbic than curmudgeon.

Opening this book, I expected a sailing story, and sailing is the focus of the first half of the story, but with “The Rite of Passage” chapter, the story shifts. The mood swings to a far more personal and emotionally intense one, no longer an intellectual or an observer stance. It’s true, we set out with a plan and life intervenes. The story began as one thing and ended as another. It’s also true that in the first chapter, Raban provides a hint about the change to come:

I had a boat, most of a spring and summer, a cargo of books, and the kind of dream of self-enrichment that spurs everyone who sails north from Seattle. Forget the herring and the salmon: I meant to go fishing for reflections, and come back with a glittering haul. Other people’s reflections, as I thought then. I wasn’t prepared for the catch I eventually made.

Despite this, I wasn’t prepared for what are essentially two distinct stories.

Jonathan Raban’s travel writing is insightful and his use of language a pleasure to read earning him many plaudits. But in someone with lesser skills, I doubt the starkness of the contrast between the themes would have worked.

For those who are “reading as writers,” Raban’s story provides a cautionary tale. Although both halves are memoir, and the story begins and ends with sailing, the two themes differ in mood, tone, and focus. The sailing memoir loses coherence; the meaning Rabin finds does not derive from the sea as suggested in the memoir’s subtitle. At times, I felt as if Raban had a contract to write about following Vancouver’s log through the Inside Passage, but then life intervened and gave him passion as opposed to an intellectual pursuit to focus upon.

There is also a lesson from what Raban does very well. Those who are writing historical stories can learn much by noting how Raban draws upon others’ experiences and interpretations and how he weaves these with his own to create a nuanced narrative. 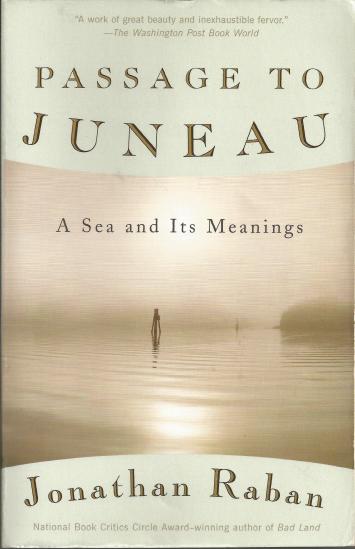 Available through your local bookstore or online: Passage to Juneau: A Sea and Its Meanings