Ben believes their marriage was a failure. Vera sees it as a stage on the way, along with others, many and different. Everyone ends up moving alone towards the self.

Ostensibly, None to Accompany Me is a political story, a story of the unraveling of white South Africa and the turmoil that spreads from the black townships, a story toward integration (of a sort), and toward the time when Nelson Mandela will become president (although his name is never mentioned). But, at the heart of the story, is a woman called Vera when she is at home and with friends, Mrs. Stark when she’s in the context of the Foundation. In this way, we see her as lover, mother, wife, friend and as dedicated, driven, compassionate, and fearless.

The trajectory of Vera Spark’s life parallels the militants’ passion during the long period between the official legislation (1991) and the actual creation of the new government. It is during this period of often violent change that the narrative unfolds giving readers an intimate look of the ups and downs of political life as the exiles and prisoners return and the personal toll of shifts and accommodations. We share Vera’s story as we weave through this morass toward change and freedom and the impact on lives.

At one point, on a trip into the townships, she and her black co-worker are shot, she in the leg. Ben, her husband, fears losing her, and says, “I couldn’t live without you.”

She could not see the violence at the roadside as evidence of her meaning in his [Ben’s] life. She could not share the experience with him on those terms. She was not responsible for his existence, no, no, love does not carry that covenant; no, no, it was not entered into in the mountains [where their affair began], it could not be, not anywhere. What to do with that love. Now she saw what it was about, the sudden irrelevant question, a sort of distress within herself, that came to her from time to time, lately.

Gradually, she comes to a realization (or admission) of what propelled the love affair with Ben and other “indiscretions.” The fallout of that creates a schism between them, as other holes develop between the politicians—old guard and new. In None to Accompany Me we find both personal and social transformation.

Nadine Gordimer (1954-2001), winner of the Nobel Prize in Literature (1991) among many other awards, knows of what she speaks, having been an activist and member of the National African Congress (ANC). Her lyrical—and at times poetical—writing focuses on apartheid and South Africa without a trace of the tract that slips into the stories of lesser writers. Although she takes on a political cause, her stories are literary, giving us fully realized characters that we care about and whose journeys keep us turning pages. None to Accompany Me is prefaced with the words of Bashō: “None to accompany me on this path:/Nightfall in Autumn.” Gordimer takes us through the seasons of a woman as she demystifies South Africa’s political transition from apartheid. 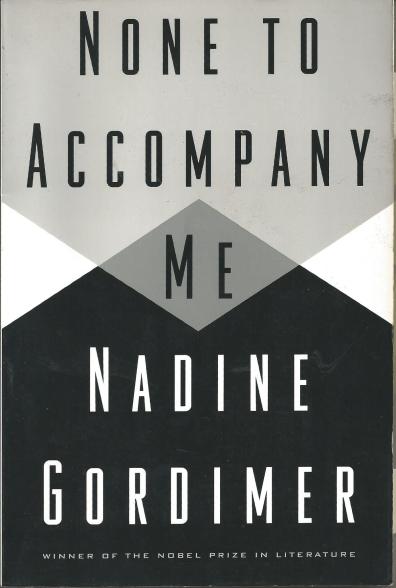 Available through many libraries or through your local bookstore or online; this link is for the audio edition: None to Accompany Me