Travelling provides a portal between cultures, a bridge between what’s known and what’s unknown.

Travelling makes me foreign; my perspective shifts from that of an insider to that of an outsider.

While I love the adventures and the hikes, exploring historical sites and the art world of the places I visit, it is people that intrigue and engage. One thing that soon became clear, as I wandered the neighbourhoods of Baracoa, is that people don’t shut themselves inside—even when home or at work—they peer out from windows and doors. Often, I was greeted with a dias (abbreviating the more formal buenos días/good morning) or simply hola (hi).

This collection of photos called “Windows & Doors” taken during my March-April 2018 trip to Baracoa focuses on people. Each photograph records a mere moment in time, capturing the liminal space between public and private, between personal and social. Each photograph documents spontaneous, transient moments, none were posed. 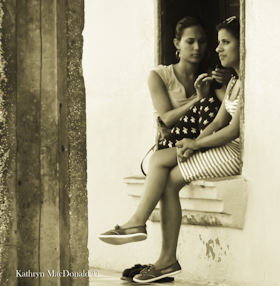 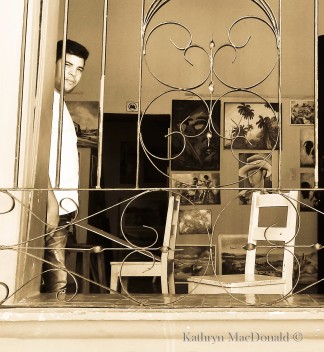 Travelling, I become an observer of people’s connections with each other, and at times with people engrossed in their phone, newspaper, or thoughts. Sometimes—especially with the children—there’s awareness of my intrusion. The children, like me, are observers. 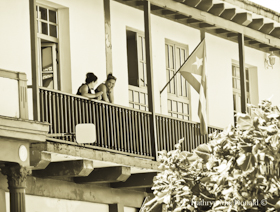 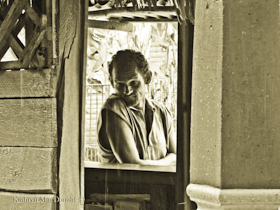 Outside Baracoa in the little fishing village of Boca de Miel on a day when the rainforest earned its name, I captured this man who rode quickly down the muddy road. He took refuge under the awning of the park’s booth (entrance to Elemento Natural Destacado Mara-Majayara). I’d taken refuge with my friend “Alber the Hiker” on a cafeteria’s bougainvillea-verandah. (More of this later and about the Oriente’s rainforest where it poured proverbial buckets.)

Also for a future blog: Excursion along the Toa River, seen here through the kitchen window where we enjoyed a visit with Alber’s relatives and a feast.

To be notified of future posts, click on “follow” and fill out the form;  you’ll receive email notifications.

One thought on “A Cultural Portal: Windows & Doors”