“For my entire life I longed for love. I knew it was not right for me – as a girl and later as a woman – to want or expect it, but I did, and this unjustified desire has been at the root of every problem I have experienced in my life.”

In Snow Flower and the Secret Fan we enter the life of 19th century women living in isolated Hunan Province, China. This is during the era when little girls’ feet were bound in order to make them beautiful in the eyes of husbands – at times hints of sexual overtones slip into the narrative, but these are not explored and remain subtle and innocent.

All I knew was that footbinding would make me more marriageable and therefore bring me closer to the greatest love and greatest joy in a woman’s life – a son. To that end, my goal was to achieve a pair of perfectly bound feet….

Lily was seven when the bones in her feet were broken and shaped over painful time into tiny arches.

Lily and Snow Flower lived in an era of matchmakers, during a time when a special bond, called laotong, might be formed between two young girls, and when fortuitous marriage matches were dreamed. It was also an era of girls’ and women’s isolation and of a secret written language called nu shu that was known only to women. Lessons – life-lessons – were taught in an upstairs women’s-only chamber. But when famine and war struck, all these beautiful-footed women’s lives became at risk. They could not run; they could barely, and only in pain, walk any distance.

Lisa See creates an intimate glimpse into women’s lonely lives. The narrative is packed with historical details that lend authenticity to the haunting tale of lives seen through the lens of Lily who was born in 1823 and who lived through the Taiping Rebellion (1851-1864). Lily shares a lifetime of hopes and realities as seen from her eightieth year, from “one who has not yet died.”

The writers among readers will be fascinated with the lyrical story the two girls write on the fan that passes between them throughout their lifetime. The messages are poetic, while adhering (for the most part) to tradition. The rituals and conventions of the time are stark and vivid. See delivers them without judgement and with honesty. Snow Flower and the Secret Fan provides a look into how women understand their lives and how they experience what love they manage to find. 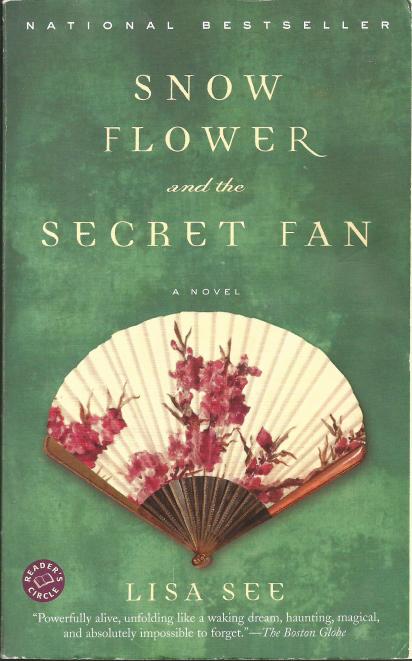 Available through your local bookstore or online: Snow Flower and the Secret Fan