Reading The Emperor of Paris is a bit like picking up puzzle pieces one-by-one and slowly discovering the picture they create. In each short chapter, we peek into the lives of the people of the eighth arrondissement, Paris. It’s a particularly innocent era before World War I when the neighbourhood was a place disconnected from the larger city and world. And after the war we witness transformations – some difficult, others freeing.

A bakery – Boulangerie Notre-Dame – stands at the centre of the 8e neighbourhood. Here we meet many of the book’s characters and glimpse their personalities, challenges, and their moods. In living quarters above the bakery we share an intimacy between Monsieur (which everyone calls the baker) and little Octavio:

Sitting in the attic window with his son nestled in his lap, Monsieur Notre-Dame would slowly turn the pages of the Arabian Nights. When he reached an illustration, Octavio would laugh and point.

A beginning then, Monsieur would say.

He told the boy his stories. They were conjured out of his head, tales that had little to do with the pictures in the book, the flying horses or the thieves in their treasure caves or the scruffy boy with his magic lamp. Monsieur told them not as the book might have, but as he saw them, jumping to life before his eyes.

This passage hints, or foreshadows, something of the man Octavio becomes. The imaginative “reading” instills Octavio’s passion for books and offers a glimpse into an affliction that eventually brings Isabeau Normande into his life.

The immigrant artist becomes one of my favourite characters. Even after being dismissed from studying, he draws obsessively, mostly in the park in all kinds of weather. CS Richardson paints pictures with words, and as this scene his sparse words show us what Kalb sketches:

Jacob Kalb, a stuffed carpetbag under his feet and his knees under his chin, hurried a last sketch of the old woman across the aisle. Since crossing into France he had managed a passable likeness of the woman’s pocked cheeks, the creases around her puffy mouth. In small vignettes he had made studies of her hands and their bouquets of arthritic fingers. On the page her hair looked like lengths of wire exploding from under her hat.

Richardson creates scene after scene that unveil the community, allowing us to see inside the hearts and actions of his characters. For example, the Fournier family run a bookstall that reflects both the bookstall and, in many ways, the neighbourhood:

The Fournier bookstall held too much poetry, mixed its philosophies with its mechanics and its travelogues among its fictions.

But the eclectic bookstall is more than a metaphor for the varied personalities of the community. It provides the pivot that creates change involving both Octavio and the scarred Isabeau Normande. In subtle ways, by the end of the novel Richardson seamlessly places all the puzzle pieces together, creating a unified whole.

The Emperor of Paris is like a fable brimming with magical, imaginative images not unlike the Arabian Nights except for the specificity of place and time. Richardson’s tale created a movie that ran across the screen of my mind, an ultimately satisfying movie made with perfect words. 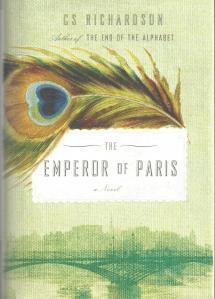 Available through your local bookstore or online: The Emperor of Paris