“The Western Bantu word for hero comes from the verb meaning to enter oblivion, to be lost, to become a spirit.”

If these are the terms and conditions for becoming a hero, then Redmond O’Hanlon is a hero: he enters oblivion; he becomes lost; and enters dark places of the spirit. O’Hanlon is a traveller, a student of natural history, and a serious risk-taker. In Congo Journey, O’Hanlon searches for a mythical dinosaur – Mokélé-mbembé – that is believed to live in Lake Télé deep in the equatorial swamps and forests of the northern Congo.

The story opens with a visit to a féticheuse who tosses a handful of cowrie shells and forewarns O’Hanlon’s traveling companion – American university professor Lary Shaffer – that he will die if he remains in the Congo for a day more than two months. To O’Hanlon she says, “You don’t speak your desires. You think them.”  It seems observation, complaint, and foretelling. The mood and tone are set for increasingly surreal and nightmarish experiences. At times, I wondered if the book actually relates a traveler’s tale or if it is pure fiction.

O’Hanlon has credentials: as a travel writer and as a naturalist. He did a doctorate at Oxford on Conrad and Darwin, and it is clear that in key ways he’s caught in the era of British exploration. The Guardian calls O’Hanlon a “legendary bonhomie.” He is a throwback, entering the unknown – not as an observer – but as a full participant, an informed participant. The party paddles through rivers, trudges along barely discernable pathways, and take refuge in villages right out of a bygone era. Scattered among these harrowing experiences are fascinating details about the birds that enamour him as:

I was woken at dawn by a loud and discordant chorus of alarm, the ka-ka-ka of a flock of Plumed guineafowl disturbed at their scratching through the leaf-litter, somewhere off to the left. You’re ancient birds, I thought, and you sound like it, you cackling old aunts in a tizzy, you fossils, you date from forty-five million years ago.

One book close by in his pocket is Birds of Tropical West Africa that we learn grows mouldy and mottled (but O’Hanlon provides an extensive bibliography, more than seven pages long.)

Redmond O’Hanlon made an extraordinary journey that took him to his destination. It simultaneously carried him deep within himself, testing him on the deepest levels. All this is shared with bluntness and honesty, blindness and seer-like vision. Readers gain more than glimpses into a man’s determination, more than knowledge about the natural history of the Congo, and more than a superficial snapshot of the people who inhabit the swamps, jungles, and villages. (Speaking of snapshots, Congo Journey includes a section of photographs.)

Highly recommended…especially for armchair travelers who want more than the common gloss of travel articles, and for those dreaming of such an adventure, Congo Journey will inform and also make you stop and think. 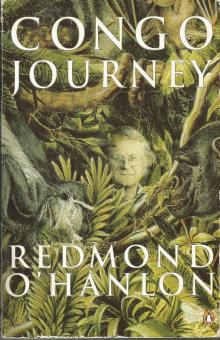 Available through your local bookstore or online: Congo Journey