In this imagined look at the life of the Gustav Klimt, we glimpse Vienna and the bohemian lives of artists in the city during the turn of the 20th century. In The Painted Kiss by Elizabeth Hickey, we meet Klimt through the eyes of Emilie Flöge, a young, upper class bourgeois girl attending a parade with her father and sisters:

“…our father was talking to a man we didn’t know. The man was wearing a threadbare sack suit and a pink daisy in his buttonhole. We had never seen a man wearing anything like that. He was not tall, but broad-shouldered and strong-looking. He was tan like the woman selling ices. He was carrying a leather case in one hand and what looked like a toolbox in the other.”

Emilie sneaks away to watch Klimt paint. Later he comes to the house to paint the daughters and Emilie convinces her father to allow her to take painting classes. Emilie grows into a young woman. One thing – as you can imagine – leads to another, and eventually to “The Kiss.” Emilie is believed to be the woman in the painting. The man is purported to be the artist Klimt himself. But Hickey’s story ventures past Klimt’s death, taking Emilie as far as the Russian invasion of Vienna near the end of the Second World War. Emilie and her niece have taken refuge at an old summer home that abounds with memories of Klimt’s visits. Emilie toys with the idea of travelling back to Vienna to see her city house, but resists:

“I am not ready for the accounting, not yet, the tally of buildings lost and buildings saved, paintings burned and paintings not. In my mind Vienna is still whole, I can see it. When I am stronger I can go back and face the losses. When the war ends I will go back.”

Hickey feeds the images we have in our minds about Vienna, about the sub-culture of artists, about the war and how it changed the lives of countless people. Despite the obvious research required to write creatively about such a well-known figure and period, Hickey keeps the story lively, not letting it droop into art-history mode for which I give her kudos. However, the book in many ways is a light romance, an easy read, which may be the perfect book for a lazy holiday weekend for those of us who like to snoop into artists’ (imagined) lives.

Most readers will recognize the art of Gustav Klimt (1862-1918), since images from his “gold period” pop up everywhere on greeting cards and posters. One of these, the “Portrait of Adele Bloch-Bauer,” was confiscated by the Nazis during WWII. In 2006, a movie called “The Woman in Gold,” starring Helen Mirren, takes the point-of-view of Maria Altmann who reclaims the painting from the contemporary Austrian establishment.

While talking with an artist friend about Klimt’s style, she asked if I’m familiar with the work of Margaret Macdonald Macintosh. Macintosh’s work was shown in Vienna in 1900 at the “Vienna Secession.” Klimt was also one of the exhibitors. Some believe that her influence created the famous shift in Klimt’s style that occurred after the show. Others suggest Klimt “stole” the style. Don’t you love when serendipity and a bit of artsy gossip slip into your life? 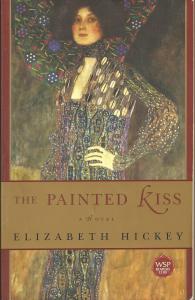 The novel is available through your local bookstore or online: The Painted Kiss