Underfoot, a fine sand shifted and confounded his progress. A strange apprehension haunted his limbs. He changed his direction twice, three times. Low, barren mountains appeared on the horizon. A lunar barrenness, the topography of dreams, stones strewn artfully down an arroyo as if laid by a Japanese gardener, a sinuous bend in the dry bed of stones, one, stone, two, a stone carved in runes… .

Like David Guterson’s award-winning Snow Falling on Cedars, East of the Mountains, is dense with description that uses all of the senses to draw us into place and experience. Besides the extraordinary detail, the end-papers provide a map of the mountain journey to help us traverse the route taken. East of the Mountains is an Odyssey, except we cross mountains rather than sea.

In Snow, Guterson explores relationships between Japanese Americans and their Caucasian neighbours along the northwest coast of the U.S. during WWII. East of the Mountains moves inland but remains true to place, although in this book the relationships involve Mexican migrant farm labourers. Here, the major conflict is within his protagonist Dr. Ben Givens and between Givens and the orchardists and other residents of the area. But East of the Mountains is essentially a character study that reveals one man’s journey toward death and acceptance.

The story is raw with pain: of bereavements; of terminal cancer and dying; a particular gun and the hunting of small birds (with two Brittany spaniels); and Italy during WWII. Balancing the emotions these themes elicit are tranquil orchard scenes from Givens’ youth; love and sensuously drawn passion; and his openness to life’s surprises.

The doctor plans suicide to protect himself from the pain he knows lies ahead and to protect his family from witnessing it. He goes off toward his childhood home among orchards to see it one more time. He hasn’t reached it in this scene where he’s arrived at a rough town. He feels like “a transient pauper, a graybeard drifter, a derelict or vagrant.” He’s on a quest, which he’s beginning to recognize:

Sitting there with his jug in his lap he thought of those Hindu wanderers he’s seen on a public television documentary, mendicants abroad with begging bowls, dressed in rags and clutching staffs, divested of all other property, seeking to meet the world unencumbered, aspiring, always, toward—what did they call it?—atman, the self, God.

Soon, Givens will wrangle a ride with a trucker. As they share their stories, he comes to another kind of realization:

Ben’s heart recoiled. The lean, spare life of the wanderer, which had held some attraction an hour before, held no attraction now.… He tried to embrace some other end than the one he’d chosen for himself—he thought of dying in a hospital room, imagined languishing in one. He fell silent and stared out the window. There were no good answers to important questions. He tried to picture the shape of Stu Robinson’s [the trucker’s] final days, but he couldn’t even begin.

Throughout, Ben Givens is pulled by his moral centre. Haunted by memories and a promise, he seeks—what? answers to the big unanswerable questions, but he tries. He becomes caught up in others’ lives and surmounts his pain (both the memories and the physical, which run a parallel course).

Inevitably, there was no other subject, and he forced himself to muse on death as though it were simply a form of sleep, warm and full of dreams.

His musing finally gave way to sleep, and Ben dreamed he was traveling in the desert. On a journey whose purpose he couldn’t guess.

The inevitability of death and the bigger questions of meaning and memory, and of promises, thread through East of the Mountains. At times, I thought the detail would overwhelm me, but I’m very glad I read to the end in order to experience the epiphanies of personal discovery. Guterson is a writer who isn’t afraid to probe the big questions, and I’m glad I journeyed through waste- and lush lands sharing the loves and fears and coming to acceptance of Ben Givens. 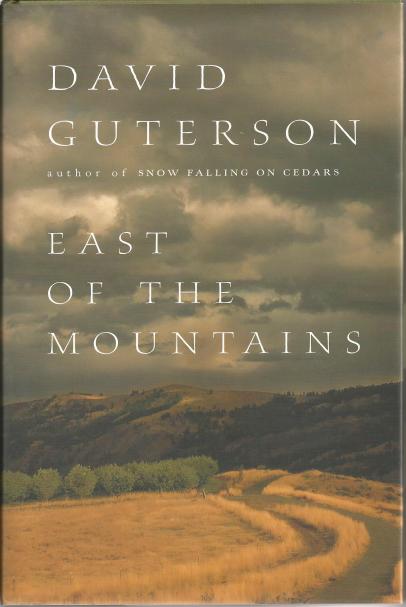 Available through your local bookstore or online: East of the Mountains